August 2nd, 2016.- Hello dear family and friends, thank you for your continued interest in reading our blog!

Richard and I, Glenda, are very glad to write in our Blog once again after a two year break and share our navigational passage of this Summer. Allow me to give you a brief summary of the last two years.  We settled comfortably on “Elemiah del Mar” for the Autumn and Winter of 2013-2014 at Club Nautico Puerto de Santa Maria. We became members of the Club and made it our home port  for our stay in Spain. We created great friendships, such as Pepe and Loli Barrera, Pikkika y Pikico  Navarro, Mila y Juan Carlos, Manolo and Sylvia Grueso, Pepis Blanco, Joselo and Maribel, Mari Carmen Bobis, Asuncion Fernandez (Richard’s Spanish teacher), Mari y Joaquin, Charo y Chani, Marisa y Robin, Maria del Mar y Serafin, Susi y Pepe Nacar,

In the Summer of 2014 we navigated into the Mediterranean with a group of friends consisting of 5 Spanish boats from Associacion de Navegantes de Andalucia (ANA).  We had planned to write our blog once we parted from the group in Malaga as they were returning to home port in Bay of Cadiz.  In Malaga we were joined as crew by our friend Juan Manuel Figallo who navigated with us to Caleta de Velez and then to Marina del Este near Almunecar.  We really enjoyed entering Marina del Este as it was here that we spent our honeymoon 15 years earlier!

Our plan was, to complete our Summer passage in Ibiza. In late September I was planning to return to Houston, Texas to take a new job at the University of Houston. However, life is always full of surprises!!  The next morning Juan Manuel hired a taxi to take a bus back to his car.  Richard and I took the same taxi to Almunecar as I felt very sick.  After dropping him at the bus stop, our medical adventure started! I was transported by ambulance to Motril for critical care of my heart as I was on Atrial Fibrilation and with my mechanical heart valve, I am considered high risk. After a few hours in ICU the doctor decided to do a cardio version on the spot, to my surprise!  Two days later we returned to Malaga for Cardiology follow up.  Two hours later I was in ICU again and next day another cardio version!  By then we got a bit scared in a foreign land and with Richard hardly any Spanish to communicate.  So we called for support to my brother Luis Miguel who lived in Ciudad Real at the time, and lovingly came to stay with us one week.  All our friends from Club Nautico recommended we move to Seville to receive specialized medical care. Our friend Manuel Grueso referred us to an excellent cardiologist, Dr. Ernesto Diaz Infante.  So, with a suitcase on hand we settled for the next two years in Seville in a small flat and kept our boat at the Club Nautico in the Bay of Cadiz.

Last July 2015 I was in better health, so I visited my Mom, family and friends in Quito,  Ecuador. Pope Francisco followed me 2 days later! jaja  I was fortunate to see The Pope three times and attend the National Mass. Our dear classmate of Class of Cardenal Spellman 1971, Bruna Stornayolo created  a Facebook page for us!  Such a brilliant idea since we are a close group of Ladies!  My sister, Mildred Hogan together with Bruna organized a reunion for my visit and I was able to reconnect with great friends and some classmates I had not seen in 40 years! It was a great reunion for us all!!

Meanwhile Richard navigated to Villa Real de Santo Antonio, Portugal.  We were not aware of a tax for pleasure boats and vehicles, so “elemiah del Mar” had to be out of Spanish waters for 6 months!! I I joined Richard end of July and together we did our Portugal passage for Summer 2015.   We navigated again the coast of Algarve up to Lagos.  We enjoyed the most visiting again Portimao , Faro and La Culatra.  We were careful to do gentle passages to test my heart and my health handled very well.  I had to give up my dream to cross the Atlantic with my Captain Richard as I will only do shorter passages for obvious reasons.  Richard still plans to cross the Atlantic possibly in December 2017 with our friend Peter Jones and hoping that one or more of our children, Juniper, Chris and Ian can take time off from work and their families to do this spectacular passage.  Richard and I will navigate together to the Canaries, then Richard with crew will sail off from Las Palmas de Gran Canaria.   Another change of my life and loss for me was that my cardiologist emphatically recommended that I retire early from my professional work.  It took me several months to adjusting to this unplanned, abrupt end my psychotherapist career!   All this time Richard has been taking Spanish classes and he now has a conversational Spanish, even though he is very challenged with the Andalucian accent. Even I, as a native speaker had much difficulty understanding the first year!  Last Autumn, as I felt better, I decided to restart my interests that I left aside years earlier due to work.  I restarted classes of painting and flamenco. 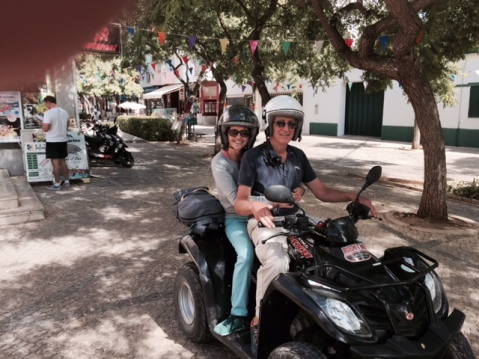 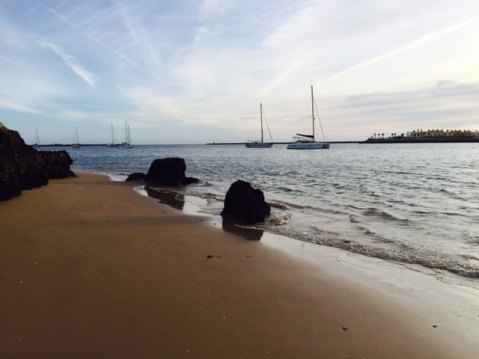 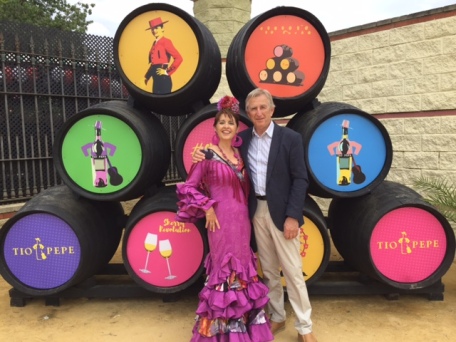 In January this year we took an overdue visit to our children, grandchildren, Richard’s sister Aunt Lizzy and dear daughters-in-law, Mariah and Pamela in San Diego, California.  We took residence for two months in our house in Kensington as it was in great need of TLC.  So, very busy painting, pluming, redecorating kitchen, driving a lot for best deals of vendors and products, gardening, etc,  Richard did a great job of redecorating the kitchen!!   While working hard we enjoyed our grandchildren Eloise, Tallulah and August Wilder and reconnected with long time friends.  We even managed to organize a retirement party since San Diego is where I practiced most of my career! 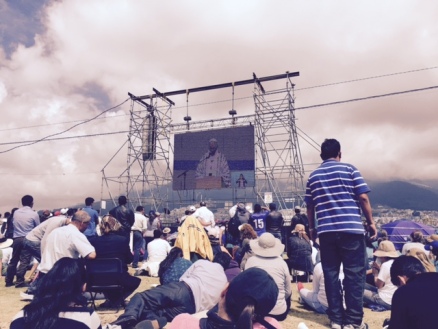 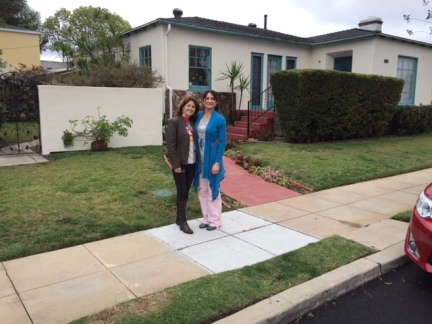 Glenda with Juniper outside her San Diego house newly painted outside 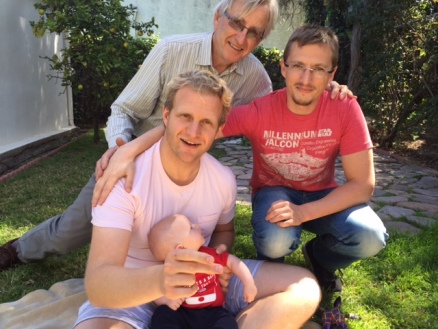 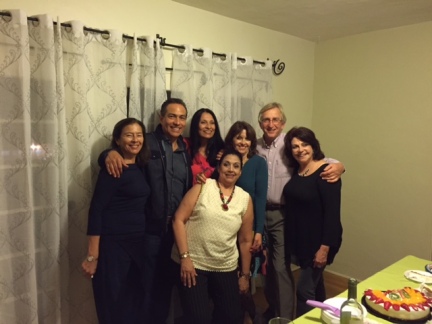 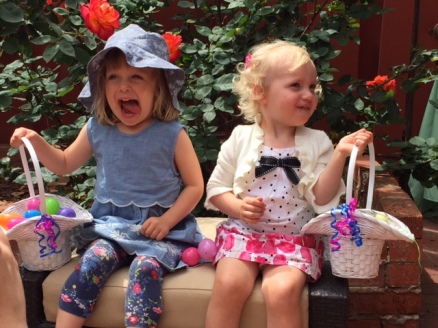 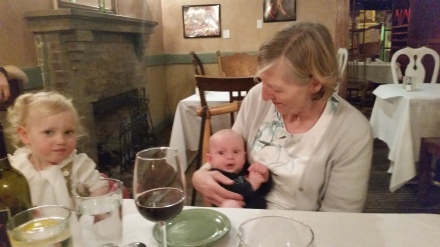 Whilst we were in San Diego we received the news that the tenant of our apartment in Hollywood Florida was leaving!  We were sure that the apartment needed painting and more TLC so as we were in the USA why not drive back to Houston visit Juniper.  Met up with Belinda and husband who has a collection of over 200 that they had to buy a warehouse.

Then onto Florida.  A long way!!!.  indeed the Florida apartment was in serious need to be painted.  However, nothing in vain we were able to catch up with good friends  Chiqui, Nancy Gomez, Magdalena Conway , Glenda’s cousin Danilo Caamano Vega + Family and Richard met up with an old friend Bill he had not seen since 1981.

Then back to Espana and prepare Elemiah for the summer.  Every 2 years the boat needs to be hauled out and the bottom repainted with antifouling paint.  We also decided as Elemiah is steel and has a painted hull we will make a change from the standatd white hull.  So Glenda was back to picking out a colour scheme.  Richard then for the third time painted the hull Aqua green and gray stripes.  As you all know painting houses as well as boats reqires a great deal of time deciding on the colour which takes a lot of time and patience. 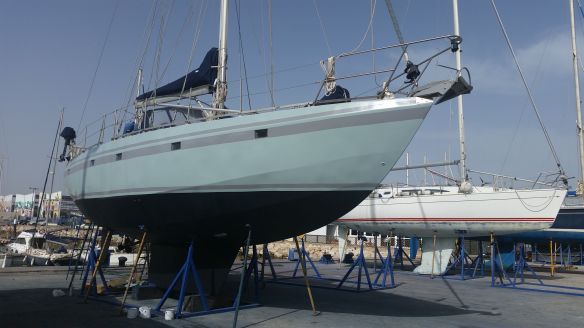 Well,this has been the year of painting and remodeling!!

A week ago I had to go to London for a few days and so!   to accompany our dear friend Alicia during the funeral of her husband, our friend John.  During this time, and taking advantage of good winds, Richard sailed off from our new home port, Puerto Sherry in Puerto de Santa Maria, to Gibraltar where I flew back last Saturday evening.  We enjoyed a few restful days and an English language fix for Richard.

Elemiah moored under the Rock of Gibraltar 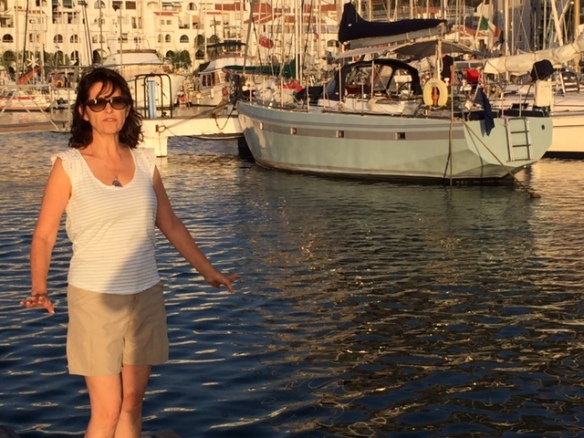