Off, the three of us went to Cies and anchored in a bay of the larger island,” Isla Del Norte” (bay 4 on the above photo).   By the time we anchored and launched the dinghy it was pitch black.  We landed on the beach, and with the help of mobile phone torch (Flashlight) application made our way up a track following Teresa. She knows the islands very well and is very protective of them!  We thought the island was totally uninhabited but after awhile to our surprise we stumbled on a restaurant!!  There are people who are long time residents before it was made a national park plus campers and some boaters.  It all closes at end of Summer and the birds and see life can have peace from so many tourists!!

The next day we explored the island on foot and later in the day by dinghy to another bay.  Glenda walked to the top of the Light “Faro in the heat and since Teresa had done several times she kept Richard company healing from his bad back.  We occasionally make exception to our Vegetarian diet, like being in an island and only can eat seafood, so we tried fantastic  “ pulpo” (octopus)  salad.  By the time we returned to Elemiah it was pitch black again as no moonlight.  We had not put the anchor light on but could pick out Elemiah from 2 garden solar lights mounted in the winches.  The night was so quiet and beautiful we were one sailing and one motor boat in the whole bay! 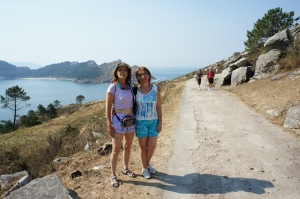 The next day we decided to visit  the smaller island, Isla Sur (bay 3 on photo).  Teresa contacted a resident  friend of hers and was anxious to share his company with us. Teresa’s friend, Paco has his primary house in the island for many many years before it became protected as a National Park, therefore he and his wife are only one of 3 residents in the island. His wife does not visit much any more due to illness, she stays at Vigo. Paco is the President of the Committe of resident of all the Islands who together help protect the islands. We landed on the beach early in the morning of Sunday and there was Paco out with his dog walking on the beach.

Paco in green shirt and guests.

From there it was a party and great Galician wine from Paco’s cellar.  Paco gave us a private extraordinary hike to the other side of the island. As all in life Paco and us also bonded as parents who share a special company, we know the pain of loosing a son and daughter!

The other end of the Island, an ancient mill

We were able to contribute food for the evening meal as he was not expecting us and brought gluten free supplies for Glenda, brought milk, whatever as his refrigerator was down.  No matter, we were joined by his friends and together we created a feast of a meal.  By the end of the evening we were exhausted and our kind host Paco gave us a bedroom instead of making it back to Elemiah.  In Spanish style we were having dinner at midnight!!

Paco, had not anticipated all the guests and needed more food so whilst we were sleeping Paco and Javier, his young guest took our dinghy and laid a net to catch fish at 2:am!   By the morning Paco had brought in a plentiful supply of fish and gutted them.  Javier cooked a vegetarian paella for us! 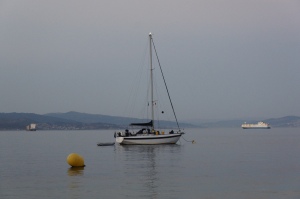 By the end of the day, Paco raided his cellar to give us some good Galician wine as a farewell gift!  We asked him to visit us in Rota, and warmly bid Paco goodbye.  We  returned our guest Teresa to Vigo who had her sweet mother and brother picking her up at the harbour.  Galician hospitality is the best we have experienced ever!!!

From Vigo we stayed a couple of nights in the last and beautiful town in Spain Baiona!  To all our fellow sailors, Baiona is a great town to visit the Pinta replica for only 2 euros, enjoy a visit to the sailing club and stock up with Galician food and wine. Next morning we said good bye to Spain and its wonderful hosts for a while! 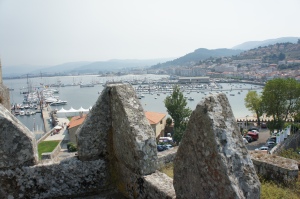 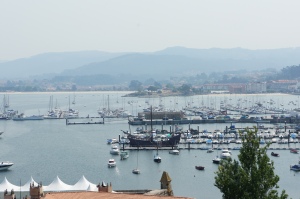 Replica of Pinta, one of Colon’s vessels that arrived back from the New World to Baiona Harbor.

To our dear followers of our blog we apologize for the delay in writing, it is sometimes hard to get a good internet and then we have to go when there is good wind!  So here is our update for Our next stop in Ria Pontevedra was a small fishing town of Porto Nova.  With an on shore wind we went into this small marina.  As we were berthing,  Elemiah nudged against the wood on the pontoon which would have been no problem except there was a screw protruding that cut an inch through the paint to the steel.   Glenda used here good Spanish and told the harbour office that Richard was Furioso which did the trick as we had 3 free nights!  Luckily we had some epoxy filler on board and all is well.

Our reason to stop at Porto Novo is that it is cheaper than the next town Sanxenxo where the finish of the first leg of La Rueda de Espana (Spain’s equivalent to the Tour de France) was taking place next day.  We set off on our fold up bicycles to Sanxenxo and as the sea front road was closed to traffic we took the race route all the way to the finish line.  We were sure we would be stopped by the police but instead we got ovations from the crowd gathering early to see the race!  We waved back to the crowd in good spirit and famous for a few minutes! J  Glenda grew up coming out with family to watching the cyclists race in the Panamerican Highway in the Andes, so she thoroughly enjoyed seeing the cyclists pass so close.  We chatted with a nice family from a City of spain situated in Africa, Ceuta.

Our next stop was Ria Vigo and to the main city of Pontevedra Province, Vigo to get permission to visit one of the protected Atlantic Islands Isla Cies.

We tied up at the Real Club Nautica Vigo (Royal Yacht Club).  The club staff were helpful in telling us the only way was to fax our documents to the Park Authority and expect a reply by e-mail.  The club faxed the documents.  However, another English couple we had met earlier in our travels, Paul & Ann told us where the park office was and all we had to do is go there and they will issue a permit.  If you do not have a permit it is a 5,000 euro fine!

We were attended to by Teresa.  We then needed to find the immigration office and Teresa took us to the street to show the way in good Spanish style.  She was so “amable” (amiable), we extended and invitation to visit us on Elemiah and that led to Teresa taking time off work and go with us to Isla Cies! We developed a great friendship!

Before we left, Teresa introduced us to a friend of her’s who is an acupuncturist (Used to be a banker).  Well Jose hosted us at his house whilst he treated Glenda for sea sickness which she had done before in Vilagarcia.  Richard had pulled a muscle in his back taking our head (toilet, potty) apart to fix a leak.  Yuk!  So Jose did a very successful adjustment!  The next day Jose came to Elemiah for some EMDR from Glenda to overcome the fear of flying as an introduction to the EMDR technique and thanking for helping us heal our little bothers. 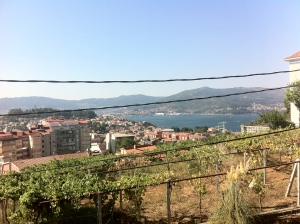